“Tatia’s Story: Life to Death in 10 Hours”
Created and Directed by Carmen Jones

This film, written and directed by Carmen Traylor Jones, documents the story of Tatia Oden French and how she tragically died along with her unborn daughter after being induced with Cytotec, a drug used off-label and still not approved for labor induction by the FDA.

View Full Documentary and Other Videos

Interested in hosting your own screening of Tatia’s Story?

Request a copy of our documentary screening toolkit by emailing [email protected]. The toolkit includes template materials and a step-by-step guide to hosting a successful event. 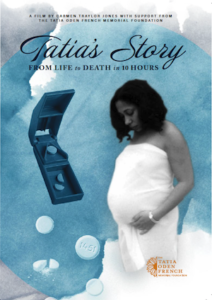 The 7-day event series featured powerful stories honoring women who have passed during childbirth, lively panel discussions/guided conversations, artistic performances, and the sharing of important announcements and resources for the community.

If you weren’t able to join, below are the agendas and recordings of each of the daily events:

Your participation with Speak! Move! Change! will allow us to strengthen our efforts, expand our reach and amplify the message about the Black Maternal Health crisis in America and across the globe.

Visit speakmovechange.net for more information about this event series.

Hear Us: Grandmothers’ Perspectives on the Black Maternal Health Crisis

On the eve of Grandparents’ Day 2020, this moderated conversation featured mothers who have lost their daughters, and in some instances grandchildren, due to complications during pregnancy, birthing, or the postpartum period. These grandmothers shared the joys, pains and triumphs of their journey toward justice.

Priska Neely is an award-winning journalist who has reported on Black infant and maternal health for years. Most recently, she reported and produced an audio documentary for Reveal connecting current birth outcomes, to a history of medical racism in the U.S. Her reporting on Black infant mortality for KPCC, the NPR station in Los Angeles, has raised awareness and shifted policy discussions.

This event was hosted by Dr. Shalon’s Maternal Action Project in collaboration with the CDC’s Hear Her Campaign and the Preeclampsia Foundation. This event was made possible with support from the Lawson Valentine Foundation.

View the event recording below, or check it out on Dr. Shalon’s Maternal Health Project website.

In this session at the CAPPA 2018 Conference, which took place in Tucson, AZ from September 28-30, attendees viewed the documentary, “Tatia’s Story: From Life to Death in 10 Hours,” and heard from Maddy Oden, Racha Tahani Lawler, and Ameenah Jackson about the reasons behind the racial disparities in maternal mortality rates and what we can do to help protect all women during childbirth.

Congressional Briefing on Capitol Hill
Protecting America’s Mothers: Lessons from France, the U.K., and the U.S. on Reducing Maternal Mortality

We hosted a Capitol Hill briefing on Thursday, April 19, to urge lawmakers to pass two bills that could help make childbirth safer in our country: H.R.1318 Preventing Maternal Deaths Act and S.1112 Maternal Health Accountability Act. The aim of the briefing was to highlight successful approaches to reducing preventable maternal deaths that have been implemented in the U.S. and in countries with much lower maternal mortality rates – France and the U.K. Panelists included:

See below for the full recording of the event, which can also be found on the Tatia Oden French Memorial Foundation Facebook page.

The Tatia Oden French Memorial Foundation, in collaboration with Black Women Birthing Justice and the H.E.A.L Club, held a screening of Tatia’s Story, followed by a panel discussion on maternal mortality and racial disparities at Mills College. Panelists included Provost and Dean of the Faculty at Mills College and founder of Black Women Birthing Justice, Chinyere Oparah, and Maddy Oden, among others.

This educational event hosted by the Wichita Birth Alliance featured a screening of “Tatia’s Story: From Life to Death in 10 Hours” and a panel discussion among consumers, maternal health experts and leaders in the birthing community about maternal mortality, the toll of racism on maternal health, and the dangers of Cytotec for labor induction. Maddy Oden was a speaker and panelist at the event. See below for pictures from the event: 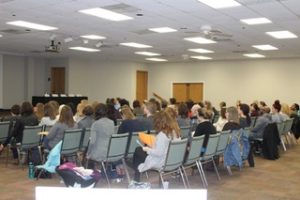 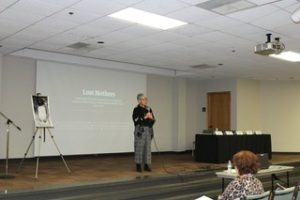 Maddy shares her story with attendees

The Role of the Birthing Community in Improving U.S. Maternity Care

This educational event included a screening of the documentary “Tatia’s Story: From Life to Death in 10 Hours,” and a panel discussion among maternal health experts and leaders in the birthing community regarding the issues of racial disparities in maternal mortality, the importance of being fully informed, and the dangers of using Cytotec for labor induction.

See below for the full event recording, which can also be found on the Tatia’s Story Facebook Page.

Premiere of Tatia’s Story: From Life to Death in 10 Hours

The premiere of Tatia’s Story, took place on January 14, 2017 in Oakland, CA at the Oakland Museum of California. The event included a panel discussion with leading midwives and the producer/director of Tatia’s Story, as well as performances from Vukani Mawethu, a nonprofit multiracial choir. You can view the full video recording of the event on the Tatia Oden French Memorial Foundation YouTube channel.